Register for more free articles. Sign up for our newsletter to keep reading.

Get local news delivered to your inbox!

Back to homepage
Subscriber Login
Please subscribe to keep reading. You can cancel at any time.
Loading&hellp
You are the owner of this article.
Edit Article Add New Article
You have permission to edit this article.
Edit 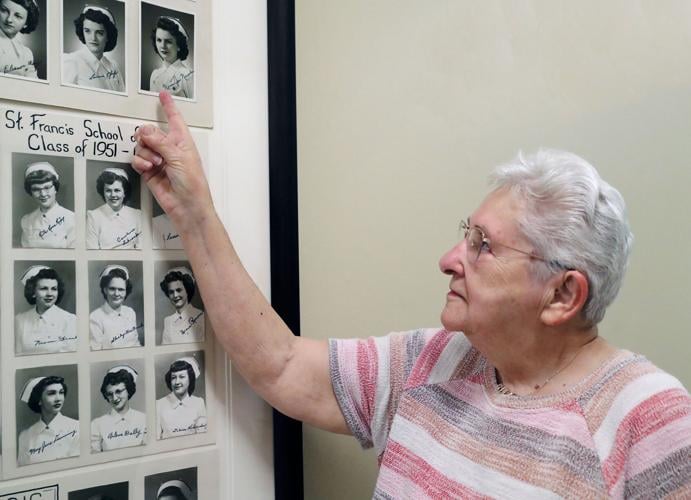 Leila Johnson of Grand Island points at a photo of the nurse that took care of her and her mother 72 years ago, when she was 7 years old. The nurse, then known as Norma Nienaber, was part of the St. Francis nursing class of 1950. 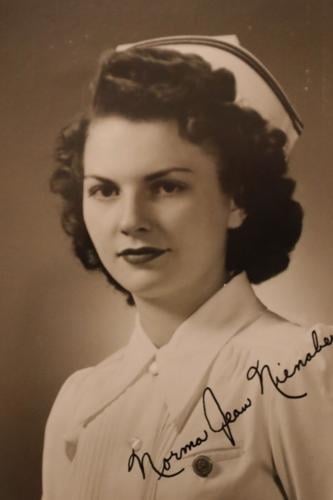 Norma Nienaber graduated from the St. Francis School of Nursing in 1950. Now 94, she’s retired and living in Fremont.

Ever since she and her mother were polio patients in 1950, Leila Johnson’s thoughts returned to the kind nurse who cared for them.

And then finally this year, after 72 years, they reconnected.

Johnson has spoken on the phone five or six times this fall with Norma Korth, who is now 94 and living in Fremont.

When the young nurse treated Johnson and her mother, her name was Norma Nienaber. A Lindsay native, she came to Grand Island to study at the St. Francis School of Nursing.

The reconnection was ignited Sept. 5, when Johnson was volunteering at the 4-H building at the Nebraska State Fair. Another volunteer, a Hastings man, introduced himself to the other volunteers. When Johnson heard his last name was Nienaber, she asked him to repeat it.

When he did, “My heart did a flip,” Johnson wrote in a recollection of the day.

She asked the man where he was from originally. When he said Lindsay, Johnson asked if he knew someone from there named Norma.

He said yes, she’s his sister. Johnson was surprised and delighted he used the present tense.

The Grand Island woman, who is 79, assumed her old nurse had passed away. She’d tried to connect with her in the past but had given up.

One time she called a number for Norma Korth in Fremont, but the phone had been disconnected.

“I waited too long,” she thought.

Over the years, Johnson has volunteered at CHI Health St. Francis, where Norma’s picture is on the wall as part of the Class of 1950.

Johnson “always walked down the hallway where her picture is and said a prayer of thankfulness for her care so long ago.”

Johnson, who was Leila Stevens at the time, grew up on a farm near Cotesfield with one brother and one sister. Their parents were Ray and Lois Stevens.

In the summer of 1950, Johnson was 7 and her mother was 32. The little girl had been sick with the flu and running a fever.

On June 30 every year, her dad always bought a box of fireworks. “And then we’d shoot off a few every night,” she said. “When Mom walked in that night, she fell. The next morning her legs were of no use.”

Doctors suspected it was polio, because the disease was prevalent at the time.

“When they went to the doctor, they took me along since I’d been sick,” Johnson recalled.

On July 1, 1950, Johnson and her mother checked in to the third floor of St. Francis Hospital. “And I don’t think I’d ever been on a third floor in my life,” she said.

They put Johnson and her mother in separate rooms in case the girl didn’t have polio.

They each received spinal taps, “which I remember as being not fun. But they both came back positive,” she said.

On the first night, they hadn’t gotten the results back, and Johnson didn’t know what might happen.

“When you’re 7 years old and your dad’s standing in the doorway because he can’t come in, you’re scared,” she said.

That’s where Norma came in. “She just made me feel safe,” Johnson said.

After the first night, mother and daughter moved into the same room because both had tested positive.

“They wrapped us in hot, wool wet blankets because that was the only treatment that they knew might help polio victims in 1950. And that was not fun. Three times a day, we had to be in there for an hour each time,” Johnson said.

Nurses also had her do a lot of exercises. “They moved your arms and legs and so forth,” she said.

Nurses had an iron lung outside their door. “Because of my choking, they were afraid that I was going to have to be in it.” Fortunately, she never needed it.

“She made me feel special. I just never forgot her,” she said.

Johnson and her mother were probably cared for by other nurses. “But Norma was the one that I remember,” she said.

It was a difficult period for her family. Her 91-year-old grandfather, who was living with them, had dementia. He passed away, and her father didn’t have insurance. “Mom was in the hospital. It was a tough time.”

Her mother told her, “I’m so glad I have it worse than you.”

Johnson received a lot of presents but she “couldn’t keep any of them because they were afraid I might take something home to my brother or sister,” she said.

“Somebody gave me their comic book collection.” If she had that today, “I’d be rich.”

The little girl got to come home after two weeks. But the disease left her mother with a permanent disability.

Lois got to come home on the weekends. She returned home in September for the funeral of her father-in-law.

She had to be carried into the church by two men. When she came home for good in mid-October, “she was in a wheelchair with two full-length braces on her legs,” Johnson said.

Later, they both received the polio vaccine “because we weren’t taking a chance on getting it again.”

Lois had a trouble walking for the rest of her life. When she left the house, she used crutches.

But her parents didn’t let Lois’ disability stop her “from doing anything,” Johnson said.

Her dad would carry his wife to the car and other places. They traveled to Hawaii and went to Nebraska football games.

He bought a car with an automatic transmission, so that she could drive.

“He was pretty special,” Johnson said of her dad.

Toward the end of her life, Lois wound up in a wheelchair again. She also had macular degeneration.

Johnson and her husband, Richard, are retired teachers.

Johnson taught for two years in Ord and 29 years at North Loup-Scotia. They moved to Grand Island when they retired in 2008.

Because she had polio, Johnson still chokes very easily. “My sister even had to use the Heimlich maneuver on me once,” she said.

Korth attended school in Grand Island for three years. “It was a nursing program led by the Franciscan nuns,” Korth said this week.

After graduating, she worked as a nurse for about six months.

“We were both from Lindsay. We knew each other all our lives,” she said.

She quit nursing to raise her nine kids. When the kids were grown, she returned to nursing on a part-time basis for 14 years.

Bob passed away four years ago.

Korth is glad she became a nurse. “I felt like this is what God wanted me to do,” she said.

Being a nurse is a very satisfying job, she said. She liked taking care of people.

Korth was very surprised to hear from Johnson.

It made her feel good to know that “my past life was good, even so many years ago.”

Although Johnson’s call came from out of the blue, Korth remembered the little girl and her mother.

“Yes, strangely enough. I had a little picture in my albums,” Korth said. “And I did remember her name — one of the very few that I remember.”

Johnson and Korth hope they can get together in person next spring.

CHI St. Francis is presenting a special award to Korth, acknowledging the impact she had on patients.

When Johnson placed the call to Fremont, she didn’t expect the retired nurse to remember her.

“I just wanted to say thank you,” she said.

Johnson hears a lot of talk about paying it forward.

“I guess I wanted to pay it backward,” she said.

Get local news delivered to your inbox!

I am the Cops & Courts Reporter for the Grand Island Independent. I welcome news tips!

Related to this story

Children are at risk of catching a common childhood virus that can cause muscle weakness or paralysis in rare cases. Veuer’s Maria Mercedes Ga…

Leila Johnson of Grand Island points at a photo of the nurse that took care of her and her mother 72 years ago, when she was 7 years old. The nurse, then known as Norma Nienaber, was part of the St. Francis nursing class of 1950.

Norma Nienaber graduated from the St. Francis School of Nursing in 1950. Now 94, she’s retired and living in Fremont.

Get up-to-the-minute news sent straight to your device.